A unique and exquisite experience! 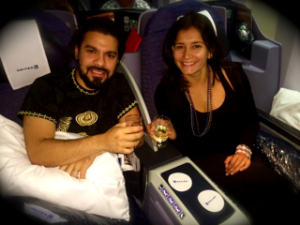 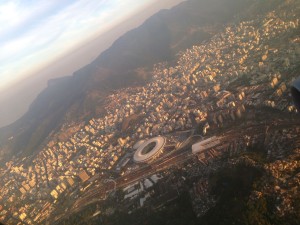 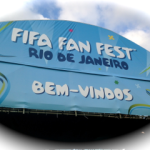 After we arrived at the hotel Acapulco Copacabana, I discovered is overbooked! After many excuses and comments from the manager, his solution was to make the bellman walk us to the next available hotel, which was in the same category as this one. I was glad I did not have to walk with a 50 lb. bag! We arrived at Merlin Copabana hotel, not too clean, not too bright, not too nice, and in need of an upgrade, but it was still close to the Fan Fest Copacabana!
1:00 pm
My first Brazilian meal, feijoada –a stew of beans with beef and pork-, Picanha –a popular cut of beef in Brazil- and farofa. Lunch was great! Plus Brahma beers while watching Argentina’s game.
4:00 pm
Fan Fest at Rio de Janeiro, was filled with crowds upon crowds of people! Big screens, soccer, colorful jerseys, energy, walking on sand, and feeling the magic of thousands of emotions and dreams.

10:00 am
Nice breakfast at Merlin Hotel. Corcovado (Christ statue) and Pao de Azucar (Sugarloaf) was extremely crowded, it will take hours to reach these popular peaks.
11:00 am
Maracaná Stadium is the next option for sightseeing. No tickets were available to get in and stadium security did not allow us to get closer to the stadium without a ticket. Afterwards we went to watch the game played in the Maracaná at a restaurant/bar close to the Maracaná.
4:00 pm
Meeting friends at Leblon/Ipanema neighborhoods. Enjoying the sea, the fresh air, and the beautiful landscape.
6:00 pm
Time to go back to the hotel and get ready for the next destination, Cuiabá. While waiting for a cab, a bus going to Copacabana stopped next to us. We decided to take it! We unfortunately missed the hotel’s stop. The bus continued into a dark expressway and a guy said something to me that did not feel ok. It was not a safe area and there was a power outage. Well, there was no other option other than get off at the next stop and walk back on the darkest night imaginable. Scary, but everything was fine.

9:00 pm
Santos Dumont Airport, Rio de Janeiro’s domestic airport is very convenient. The flight was on time to São Paulo and then to Cuiabá – the center of South America and the host city of the Colombia Vs Japan game. Arriving at midnight at Deville Hotel, we were extremely hungry. A lot of security were outside the hotel, asking for proof of reservation in order to get in. I got a little worried. This small city was not too safe after all. It was a very good hotel, clean, and with a nice staff! Highly recommended.
12:30 am
It was very hot and humid. I started looking for an open restaurant in Plaza Popular, just a few blocks from the hotel where everything converges. It felt like we had arrived in Colombia; everyone was wearing a tricolor jersey, and people were singing, drinking, dancing, socializing, and having fun! Sausages were the only late snack available besides alcohol and a sweet night just passed in Cuiabá.

Cuiabá is a very safe place. What I noticed coming back to the room was that a soccer team was definitely staying at our hotel. I could not believe when the receptionist confirmed my suspicion. Yes! The Colombian soccer team was staying in our hotel. No wonder why one of the best hotels in Cuiabá was full for the next two nights and hotels were not available in the city. The first and last night, we stayed at Deville Hotel; and for the other two nights, we were left with no other option but to try an Airbnb.

9:00 am
Had a great breakfast buffet while waiting to see the Colombian players. Brazilian cheese bread was delicious! One hour later, they started to show up from the reserved floor, which was a level above the entrance/breakfast room. Happy to see them!
11:00 am
Stayed at the hotel’s bar, watching the next game and waiting for them to leave for practice. A closer look won’t hurt! 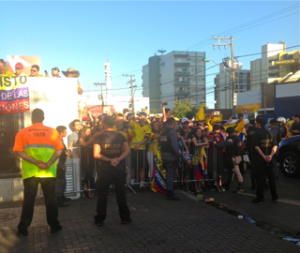 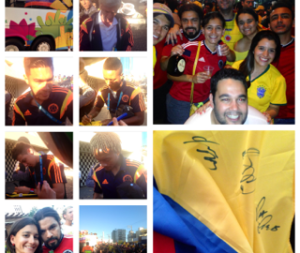 4:00 pm
The rumor was that the team was almost ready to leave. People were outside the hotel also waiting for them. Their bus arrived, flags were raised, hearts are beating faster, and dehydration is almost happening from standing nearly one hour under approx. 90F and 80% humidity. Finally they are out and despite security, they are able to give autographs and smiles. 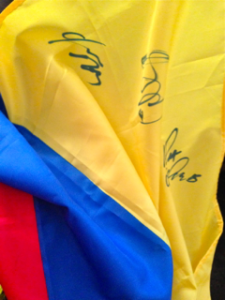 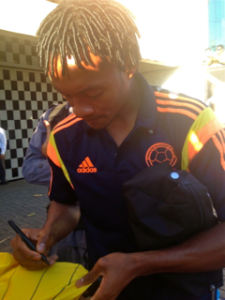 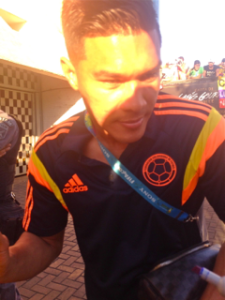 5:00 pm
Brazil Vs Cameroon. The whole city stopped. Everybody is watching the game. Plaza Popular (streets and bars) is totally full. Brazil, a favorite to win the World Cup, is showing all they have. Four goals and every one of them makes the people around jump higher, scream louder, and drink faster. What an incredible atmosphere. Huge celebration coming up!
9:00 pm
Still at Plaza Popular, we found Espeto Popular restaurant, full of flavors and great steaks. A Picanha for two, with rice, cassava (yucca, one of my hometown cravings), sharing style, and loving it! We met some very nice Colombians who made our stay even more enjoyable and our Airbnb host for the next two nights in Cuiabá. Great, flexible, and happy people around here! Degmar, our Airbnb host, was phenomenal.

Breakfast in the house, thanks to our great host. The house was a cozy and artistic apartment with a great spanning view of the Arena Pantanal Stadium. Yellow-Blue-Red faces, jerseys, flags, and hats ready for the match against Japan. Meeting up with new friends at a bar close to the stadium. Warming up watching Uruguay playing Italy first and then walking to the stadium. 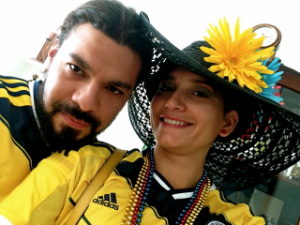 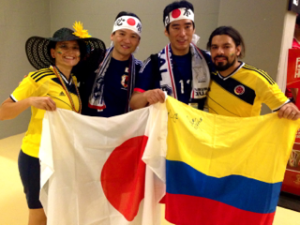 3:15 pm
The lines to get in the stadium are huge, it is not clear where they start or finish. Temperature is burning. It feels like home again, except for a few Japanese in sight.
3:55 pm
The Colombian anthem is loud! The people there make it loud, proud and emotional. Tears fall down.

4:00 pm
Kick-off time! A tied first half, 1-1. Changes were made for the second half and Colombia played an incredible game, winning 4-1. My favorite goalkeeper, who has been playing for years with the team, gets in to be officially the oldest player to play in a World Cup, a great catch avoided a goal for Japan and everyone is seeing their hero making history. Mondragón!!
6:00 pm
Colombian people, Colombian music, and Colombian celebrations. The moment is glorious!
10:00 pm
Back to Plaza Popular, live batucada is happening! There is music, samba, a collection of drums, and great energy. I could not resist joining the crowds and dancing together le son du Brazil. 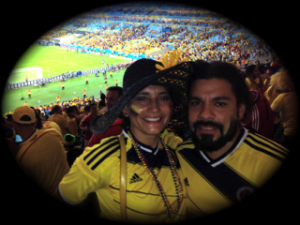 A relaxing day, eating local seafood, watching the games, and moving back to Deville hotel for the last night in Cuiabá. Celebrating life and love with sparkling wine and fresh strawberries cocktails at Plaza Popular. Cheers! …

Stay tuned for the next article! Back to Rio de Janeiro, Maracaná Stadium and James Rodriguez’s best goal of the World Cup.

This article has 18 comments